The project consists in the prototypal realization of a Security Center aimed to support safety and protection of citizens in the city environment and create a defense tool against terrorist and / or criminal acts and extreme hydrogeological phenomena. By integrating various specialized systems and technologies, the platform provides advanced services to support environmental monitoring and management of municipal and / or regional resilience. 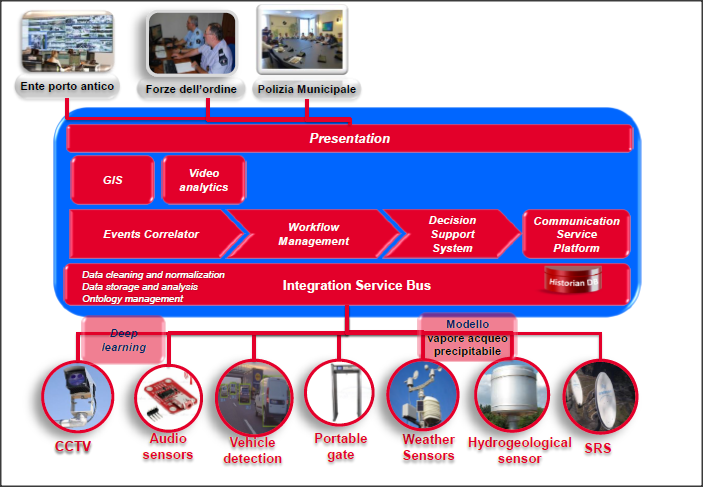 The architecture of the platform can be divided into the following functional subsystems:

HIMARC platform is the basic components to enable a “scalable” and distributed security system, which uses the current public lighting infrastructures and is capable of detecting anomalous situations in crowded environments.

HIMARC sub project focus on independently learn a definition of “normality” based on the recurring situations being observed. If the system “sees” a normal flow of crowds for several hours, it is able to warn a human operator if the dynamics he has learned were no longer respected in some part of the monitored environment. The same approach is applied for the study and modeling of the individual trajectories of the objects detected by a tracking algorithm and this can be useful in scenes where the resolution of the sensors and the complexity allow to detect and track the individual subjects in movement.

The intelligent peripheral nodes will be able to process video signals in real time and to realize the interconnection with the central functions through a high transmission speed communication infrastructure, moreover they will be able to spread audio alert messages for the surrounding population that can be properly controlled by the central processing system. Finally, the intelligent nodes will be equipped with high efficiency light sensors (LED) such as to guarantee the functionality provided by the public lighting service at extremely low operating costs.